In the same vein that the post before this one we will show here how to construct the connections between the cortical layers. In order to do so we will construct a function that works in general for any arbitrary connectivity, we describe in the following its structure. First, as in the thalamo-cortical connectivity, we have again the same structure of a function that loops over the target population extracting the relevant parameters that characterize these neurons. Furthermore we have another function that loops over the source population creating the corresponding tuples for the connection list. Is in this last function where the particular connectivity rule is implemented.

Now we present the function that creates the connectivity for a given neuron par. The circular distance between the orientation and phases are calculated as a proxy to estimate how similar the receptive fields of the neurons are. After that, the distance between them is weighted and normalized with a normal function in order to obtain a value that we can interpret as a probability value. Finally in order to calculate the connectivity we sample n_pick times with the given probability value to see hwo strong a particular connection should be.

Secondly we present the full correlation scheme. In this scheme we utilize the kernels directly to calculate the spatial correlation between them. In particular after we have flattened our kernels Z to have a series instead of a matrix we use the function perasonr from scipy.stats to calculate the correlation. Again as in the case above we use this probability to sample n_pick times and then calculate the relative connectivity strength with this.

We now show how a plot that illustrates how the probabilities change when the parameters that determined the gabor function are changed for each scheme. 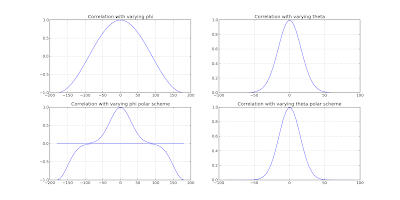 In the figure above we have int he upper part how the probability for the first scheme a neuron with phase 0 and orientation 0 change as we vary the phase (left) and orientation (right). In the two graphs bellow we have the same for the second scheme we presented

In this post I will show how to build arbitrary custom connections in PyNN. We will illustrate the general technique in the particular case of the Troyer model. In the Troyer model the connections from the LGN to the cortex are determined with a gabor-profile therefore I am going to describe the required functions to achieve such an aim.

In the PyNN documentation we find that one of the ways of implementing arbitrary connectivity patterns is to use the FromListConnector utility. In this format we have to construct a list of tuples with a tuple for each connection. In each tuple we need to include the index of the source neuron (the neuron from which the synapse originates), the index of the target neuron (the neuron into which the synapse terminates), the weight and the delay. For example (0, 1, 5, 0.1) would indicate that we have a connection from the neuron 0 to the neuron 1 with a synaptic weight of 5 and a delay of 0.1.

The first thing to note from the function above are its arguments. It contains the source population and the particular target neuron that we want to connect to. It also contains all the connectivity and gabor-function related parameters. In the body of the function we have one loop over the whole source population that decides whether we add a connection from a particular cell or not. In order to decide if we add a connection we have to determine the probability from the gabor function. Once we have this we sample n_pick times and add a weighted synaptic weight accordingly to the list for each neuron.

This function requires as arguments the source and target populations as well as the necessary parameters that characterize each cell connectivity: orientation and phase. In the body of the function we have a loop over the cortical population that extracts the relevant parameters -position, orientation and phase- and then calls the function that we already describe previously in order to create the connectivity from the source population to the cell in place.

So now we have the necessary functions to construct a list. Now, we can use FromListConnector to transform the list into a connector. And the use this to define a Projection. We define both the excitatory and inhibitory connections. We abstract this complete set into the following function:

With this we can create in general connections from one target population to the other. We can even change change the gabor function for whatever we want if we want to experiment with other connectivity patterns. Finally we present down here an example of a sampling from a Gabor function with the aglorithm we just constructed: 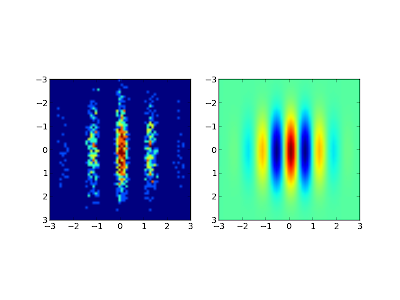 So in the image we show in the left the sampling from the ideal Gabor function in the right.

In this example we are going to create a population of cells with arbitrary spike trains. We will load the spike train from a file where they are stored as a list of arrays with the times at which they occurred. In order to so we are going to use the SpikeSourceArray class model of PyNN

First we start importing PyNN in with nest and all the other required libraries. Furthermore we start the simulators and given some general parameters. We assume that we already have produced spikes for the cells with 0.50 contrast:

So we are going to suppose that we have our data stored in './data'. The spike-trains are lists as long as the cell population that contain for each element an array with the times at which the spikes occurred for that particular neuron. In order to load them we will use the following code

Now this is the crucial part. If we want to utilize the SpikeSourceArray model for a cell in PyNN we can define a function that pass the spike-train for each cell in the population. In order to so we use the following code:

Note that we have to change every spike-train array to a sequence before using it as a spike-train. After defining this function we can create the LGN models:

Now that we have the corresponding model for the cells we can create the populations in the usual way:

Note here that we can chose the layer of our interest by modifying the value of the layer variable. Finally we run the model with the usual instructions and extract the spikes:

In order to visualize the spikes we use the following function:

Here the spiketrain variable contains the spike-train for each cell, that is, an array with the times at which the action potentials happened for each cell. In order to tell them apart we assigned them the value of the cell id. Finally we can plot the spikes of the on and off cells with the following code:

We now show the plot produced by the code above. Note that the on and off cells are off-phase by 180. 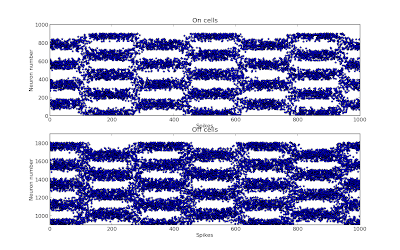 Now that we know how to do convolutions with our center-surround kernel we can chose any other kind of stimulus to carry this out. In the neuoscience of vision it is very common to use a sinus grating in a wide array of experimental setings so we are going to use it now. In short, in this post we are going to see the see what signal does a center-surround kernel produces when is convolved with a sinus grating.

In order to do the convolution we are going to define the kernel in the usual way using a function that we have utilized from our work before:

Now we are going to construct our sinus grating. But first, we need to think on how long our stimulus is going to last which is a function of how long the we want to simulate the convolution and of the resolutions of the stimulus and the simulation:

Finally we now present the parameters that determine the sinus grating. First the spatial frequency (K), followed by the spatial phase (Phi) and orientation (Theta). Furthermore we have also a parameter for the amplitude and the temporal frequency:

Now with all the spatial parameters in our possession we can call the function that produces the sine grating, we define it as the following function that we present below:

Now that we have the stimulus and the kernel we can do the convolution, in order to do that we use again our functions and indexes that we use in the last post:

We can visualize signal with the following code: 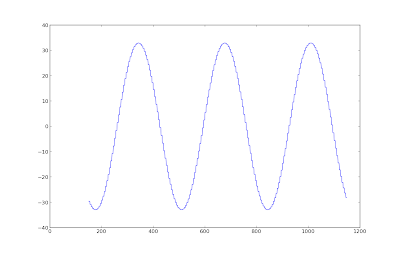 We can see that the signal is also a sinus with a frequency that is consistent with the one from the sinus grating.